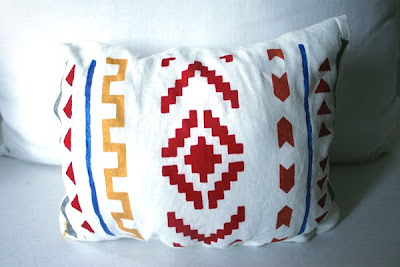 Plaid asked a number of DIY bloggers to try out their new home screenprinting kit. Plaid provided the kit and compensated me for reviewing the product. All opinions and mistakes are my own.
The short of it is this product made a complete fool of me. I feel like one of those chefs on Chopped who planned on croquette of pomme frites remoulade and ended up with a cold baked potato.
What I'd hoped to make for you tonight was a trendy tribal-Navajo-Pendleton inspired clutch or other object. The lumply little mess above is what I scraped together in the final seconds with a sprig of parsley on top. This is mostly my fault.
You can download my stencil at examiner.com. (FYI, there's also a template there for regular stenciling, which doesn't require a screen print kit.) 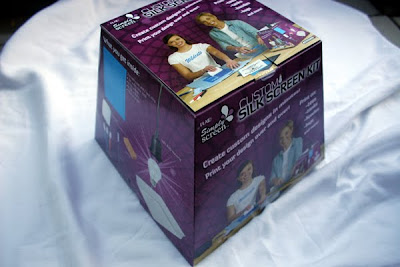 The screen printing kit comes like this. The packaging becomes your lightbox, which is pretty brilliant. 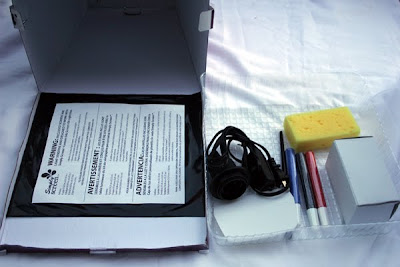 Inside is a light, tray, sponge, brush and a bit of paint. 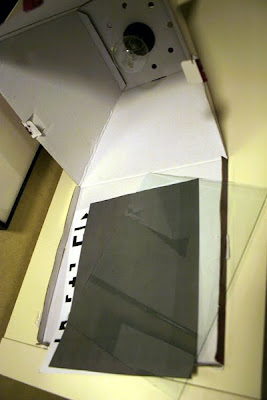 You can create a design on your computer or with a black marker. You make your stencil using a light-sensitive sheet. The black parts of your design wash off in water after exposure, leaving a very fine screen that allows paint to go through. This means no cutting out a stencil, which is huge if your design is curvy or complicated or you have bad knife skills. (That would be me.) 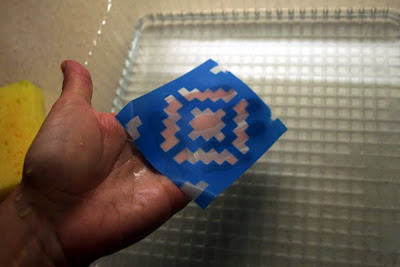 My test screen came out sharp in some areas but the emulsion did not come off in others. Some other bloggers had suggested increasing the exposure time. Big mistake. 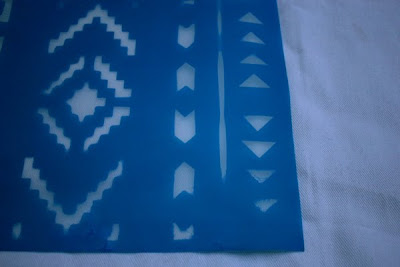 After an hour of scrubbing on my stencil, the emulsion still did not come off some areas. At this point, if I had paid for the product, I would have stenciled a rude note to Plaid. I went to bed. 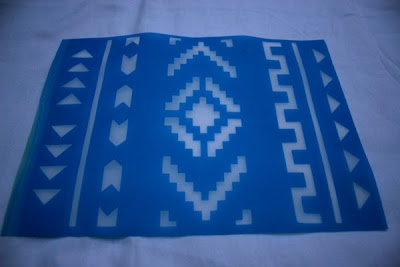 The next night, I tried again using refill sheets provided and the recommended exposure of 25 minutes and ended up with a nice sharp stencil. 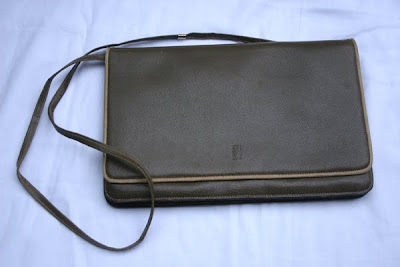 My plan was to take this thrift store purse, paint it white and then stencil a design on top. This was before I understood that stenciling and screenprinting are not the same thing. 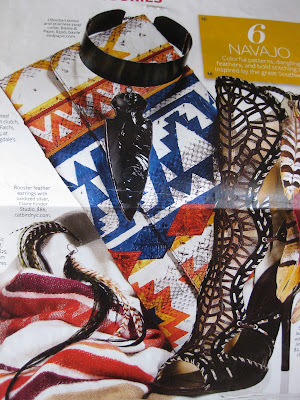 The idea was to knock off this Carlos Falchi snakeskin clutch that appeared in InStyle magazine (and exists nowhere else it seems). 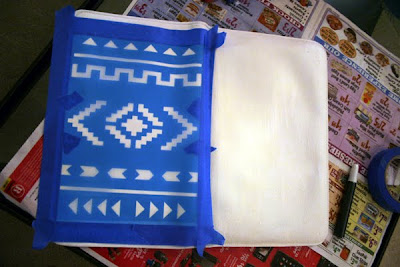 I taped down my stencil and squeegeed on my paint. By the time I got all the colors on I wanted, my first color had dried on the screen. 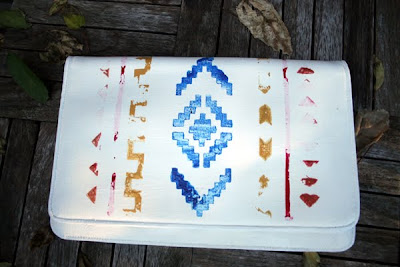 And I learned you can't screen print onto a non-porous surface.
I spent the next 20 minutes scrubbing dried paint off my screen and went to bed. 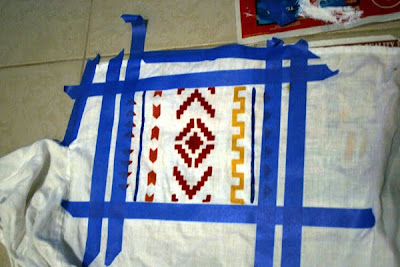 The next night, I tried again with a thrift-store linen shirt. I was about out of blue paint, so I had to settle for red.
(Note that my screen printing is done on the kitchen floor because I live in a tiny apartment.)
I got it in my head to use masking tape to create some additional stripes. 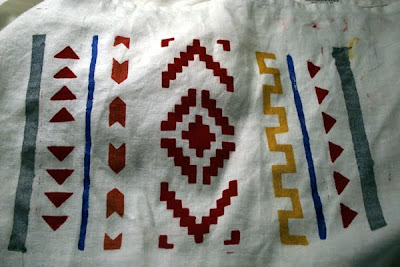 Mistake number 3 (or is it 4 now?) was trying to do a multi-color stencil for my very first project. The stencil had to be lifted immediately so the paint wouldn't dry to it, and color had to be allowed to dry on the fabric before the next color could be laid down. This took all night.
Which is why the masking tape stripes were painted by me the next morning before work and in dress clothes.
Mistake 7. Don't use linen. It's light and wrinkly and won't let go of masking tape, and your paint will blob.
Mistake 8, 9, 10. Don't be in a hurry. I blobbed paint everywhere. 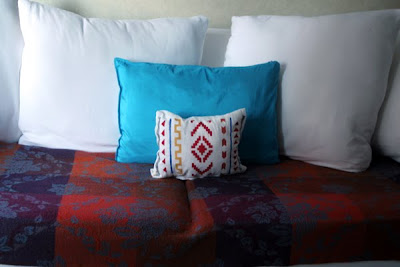 In the interests of full disclosure, my pillow is tiny. (I ran out of time to repeat the pattern to make a normal sized one. See mistake #3.)
The screenprinting kit is $40 and is available only at Hobby Lobby. Refill packs of the light-sensitive screens are $20.
That means if I had paid for the products, this pillow would cost more than $70 to make. More than a real Pendleton pillow. (Still less than a Falchi clutch.)
On the other hand, Hobby Lobby does the 40% off coupon thing pretty often, so you could get by for less.
So, given infinite time and space, a steady hand, a reason to repeat your stencil over and over, and other things I did not have, this is a cost-effective DIY product with infinite possibilities.
Other bloggers did some really cool things. I'm too pooped to link up. Maybe next week. In the meantime, The Silly Pearl has most of them.