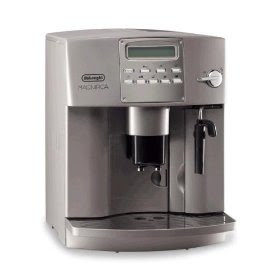 So, here it is, the DeLonghi Magnifica coffee maker. The Lamborghini of coffee makers. Smooth. Silver. This guy grinds the beans, heats the water, steams the milk, cleans up after itself, and makes the bed for you. It normally runs about $1,000, greater than the value of our last car. How do we get one? Better yet, how do we justify one?

The Ginnie Mae website offers a helpful renting versus owning calculator. It's meant for homeownership, but the principle applies. Currently we "rent" coffee (and assorted donuts, apple fritters and spinach feta wraps) at a rate of about $30 a month from the good people at Starbucks. We split a venti to get two cups of coffee for slightly more than the price of one. This adds up to an indulgent $360 a year, still a far cry from the $1,000 expense of owning a coffee maker.

But, our coffee maker wouldn't just make a budget-driven cup of black coffee. It makes lattes, which would add at least another $240 to our rental expense if we were to rent lattes from Starbucks. Also, since Starbucks switched to its Pikes Weak Roast, we never know if we are going to get a strong cup of coffee or something that belongs in a McDonalds cup.

Now, let's look at the cost of owning. Tom found a DeLonghi demonstrator model at the York Street Starbucks. The manager offered multiple discounts, which would bring the $1,000 model down to about $400. Now the costs are comparable.

However, Ginnie Mae neglects to include the cost of maintenance and upkeep of your "home." We now have to add in the cost of two pounds of coffee a month, purchased at the Sahadi's discounted rate of $3.50 a pound, which adds up to about $84 a year. Milk and sugar are free. Throw in some disposable cups, and we have a maintenance cost of about $100 a year.

But there is one more factor to consider. It will take a little longer than a year for the DeLonghi to pay off its capital cost but it will continue to make coffee for years. Prorated over a period of five years, the cost of home brew falls to about $200 a year - a bargain compared to what we are spending now. And there's the sheer enjoyment of hearing the thing heat up just before you get out of bed. Priceless.

Of course, we don't get the enjoyment of reading semi-lame quotes off our Starbucks cups. But we could make our own. Stay tuned.

So how do we come up with the cash for a fancy coffee maker? Stayed tuned on that one, too.